The following article was prepared by local historian Andie Byrnes and is reproduced here with her kind permission. Other articles on the history of Rotherhithe can be found on her blog here.

Globe Wharf is a vast six-storey warehouse built in pale yellow brick at 205 Rotherhithe Street, SE16 5HW.   Restored and converted into 138 apartments by P.R.P. Architects between 1996 and 1999, it was originally built as a granary.  The modern conversion includes internal courtyards where brickwork shows different stages of the building’s evolution.  A rice chute is preserved in one of these.I thought that it would be quite easy to find out a lot about the building, if only because it is such a massive presence, but it has taken a while to assemble any sort of coherent account of Globe Wharf.Apart from its immense size (it is 20 bays wide and 13 deep), the most interesting features include the fine quality of the bricks, the four elevation housings with pyramid-shaped roofs, a jibbed crane and the interior wooden floors on iron columns.  There’s a full description of it on the British Listed Buildings website. It is Grade II listed.

Globe Wharf was built in c.1883 by A.P. Keen and Co. as a granary.  It was named after the Upper Globe Dock Shipyard, on the site of which it was built, where Henry Bird Junior had built small ships for the Royal Navy during the mid-1700s and where William Marshall had a timber wharf.  The builders of Globe Wharf retained the dry dock, but this was filled in and built over in 1907. Rotherhithe’s shipbuilding yards had steadily been replaced by granaries and other warehouses as shipbuilders went out of business the requirement for Thames fronting warehouses spread steadily east from Bermondsey.

It was probably the single largest Rotherhithe commercial building.  According to research by Stephen Humphrey in 1887, it could hold 60,000 quarters of corn. 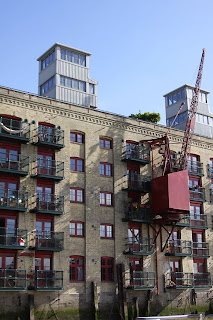 In 1924 Globe Wharf was converted for storing and milling rice by Thames Rice Milling, one of several rice mills in Rotherhithe.  There’s precious little information available about the establishment and operation of rice mills in London, so the following is the tip of a poorly recorded iceberg.   Rice milling is the process of separating the white centre (the pieces of rice that we buy and eat) from the various layers of husk and bran that surround it.  The milling machine (a rice huller or husker) was invented in the late 1700s and consisted of a feeding chute, rollers of wood or steel that broke up the outer layers and separated them from the edible interior. The mechanism spread rapidly throughout the United States throughout the 1800s and by the 1920s was employed all over the world.  Rice, originally imported from Asia, was also grown successfully in Spain, South, Central and North America and elsewhere.  Thames Rice Milling is now dissolved.

The towers on top of the building, described in the Grade II listing description as elevation housings, were present in the 1937 photographs, but although I assume that they were connected with the use of the warehouse as a rice mill, I have been completely unable to find out what they were for.  Infuriating!  It has been quite fun listening to the best guesses of friends, but it would be useful to have a correct answer, so if you know what they were for please get in touch.
On the Thames frontage, there is a red crane attached to the wall. This is a 20th Century addition, a lattice jibbed crane. It apparently dates to after to the 1930s because it was not in place in the 1937 Port of London Authority panorama photographs.  Now purely decorative, it was used to hoist cargo from boats moored outside.  It would have been easy for the company that converted the building to apartments to avoid the effort of preserving this piece of the wharf’s heritage, so it is particularly welcome that it has been saved.In the 1937 PLA photographs, there was a rice chute on the front of the building, to the west of where the crane now hangs, leading from the roof down into the lower levels of the building. 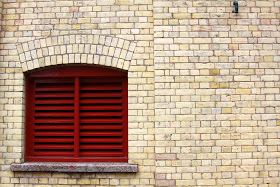 Apart from recessed bays, Globe Wharf’s stark facades were unalleviated by any form of decoration when it was built, unlike warehouses like the smaller Columbia Wharf and Brandram’s Wharf, which employed coloured bricks to add some interest to the design. The balconies are, needless to say, a modern addition.   The only decorative element is a dentilled brick cornice, which can be clearly seen in the third photograph just beneath the roof.  The brick is of a much higher quality than the usual London stock used for most warehouses and granaries in Rotherhithe, a much paler shade with a smooth surface without the usual pits and cavities.
The building curves along a bend in the road.  As it would have been much easier to build it in a straight line, the original road presumably followed the same curve, as it does today.  The Thames frontage is perfectly straight.
Immediately downriver are the Globe waterman’s stairs, which are clearly visible in the second photograph.